Could Covid-19 and other highly infectious diseases be a consequence of global deforestation and the displacement of natural species? A number of experts think so.

As we all try and look to the future, a time when life can return to something approaching normality, many scientists are looking back, tracing the spread of coronavirus all the way back to its source in the hope that steps can be taken to ensure such a devastating pandemic doesn’t happen again.

The common consensus among experts is that the virus originated in an animal market in Wuhan, China, where large numbers of different species were crammed together along with human workers and customers. These are the ideal breeding ground for ‘zoonotic’ diseases such as Covid-19, those that jump from animals to humans.

But while these ‘wet markets’ are a key part of the spread of the pandemic, many experts also point towards deforestation and loss of habitat as the real source of the deadly disease – and not just this one.

A major study has found that hunting, farming and the global shift of people from rural areas to cities has led to massive declines in biodiversity and an increased risk of viruses such as Covid-19 being transmitted from animals to humans.

The research by scientists from Australia and the US traced the animals most likely to transmit pathogens to humans, and found that the spillover risk was highest from threatened and endangered wild animals whose populations had declined largely due to hunting, the wildlife trade and loss of habitat. Bats alone have been linked to diseases such as Sars and Ebola.

“Biodiversity loss is becoming a big driver in the emergence of some of these viruses,” said Elizabeth Maruma Mrema, Acting Executive Secretary of the UN Convention on Biological Diversity. “Large-scale deforestation, habitat degradation and fragmentation, agriculture intensification, our food system, trade in species and plants, anthropogenic climate change – all these are drivers of biodiversity loss and also drivers of new diseases. Two thirds of emerging infections and diseases now come from wildlife.”

While animals have always carried diseases harmful to humans, with such diseases constantly evolving into new and deadly strains, the difference now is that there is less distance between humans and animals, making close interaction more and more frequent. As cities and towns become bigger, and agriculture erodes natural habitat, different animal species increasingly share the same space, providing more opportunity for pathogens to be transmitted from species to species, and animal to human.

There’s clearly a huge challenge for the entire world to get back on its feet once Covid-19 has been beaten. Once it does, there’s an equally huge challenge in setting in place legislation to ensure that it doesn’t happen again. And while the banning of wet markets and the illegal trade in wildlife are key steps in the fight against future pandemics, looking after natural habitats and halting deforestation are just as important. 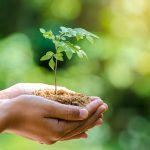 The truth about tree plantingNews